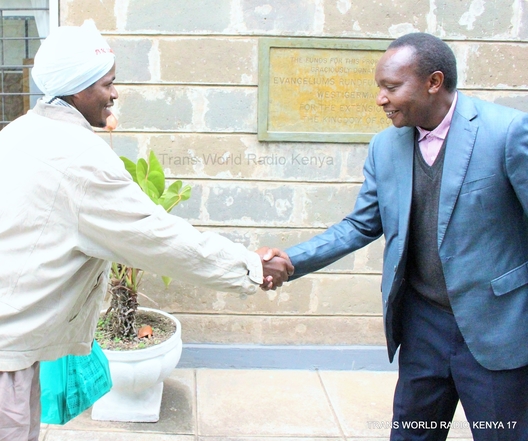 For three years now at the crack of dawn Trans World Radio Kenya has been running ‘Tabarira ya Dorothy’ ( Dorothy’s Program), a 15 minutes devotional program through her partnering Station Coro FM. The program that is produced and presented in Gikuyu language is an adoption from English version of the Dorothy Daily Devotion by Dorothy Bennett. Every weekday since 2014 & from 5:45 AM, Njeri wa Thuku the program’s producer and presenter inspires the listeners with a 10 minutes devotion. Judging from the letters, short text messages, and phone calls, we have received since the program’s inception we would not be wrong to say that the devotions have touched many lives and has led many souls to Christ.

Ibrahim Gitau is one of those listeners, born 28 years ago in Nakuru. Ibrahim grew up without knowing Christ and thought everything was just ok without accepting Christ as his savior. His life was mixture of vicissitudes that so him drop out of high school due to lack of school fees.

Despite all this challenges, his love for listening to the radio has remained constant and one day in 2004 as he was listening to one of his favorite program on Radio, he heard the preacher share about how if you are living in sin and you have not asked for forgiveness from God, then you will not see God. After the sermon the conviction got strong, he surrendered his life to Christ and he followed the preacher’s instruction of looking for a church to help him grow in faith and he has never regretted that move for his life has never been the same.

The Holy Spirit led him to join the African Israel Church where currently holds the title of a Shepheard and a personal assistant to the Bishop.

"Ever since I surrendered my life to Christ after listening to a radio preaching, my love for radio devotions has really been strong, I have really grown spiritually thanks to the devotions of Tabarira ya Dorothy. They have been of great blessings and inspiration to me and as a leader in church I have used the devotions to prepare my Sunday sermons. Every day I wake up very early in the morning to ensure that I don’t miss the devotion and I listen at the same time recording the program on my phone so that at my own convenience I will listen again.

In the program I usually hear Njeri wa Thuku announce that in case you here need a devotional books to help you grow spiritually contact Trans World Radio Kenya and request for Food for Faith or Quest for God. Even in today’s program that I recorded in my phone she mentioned it and that is how and I called the number that she gave and she directed me how to get here.” Explained Ibrahim

To my surprise I have also met the pastor who led me to Christ, it had never crossed my mind Trans World Radio Kenya is also linked to Pastor James Karichu of Rugendo (Thru The Bible in Gikuyu) program. My busy schedule has prevented me from listening to pastor but am very happy that he has showed me the online link where I continue to follow the walk thru the bible programs.” He added. 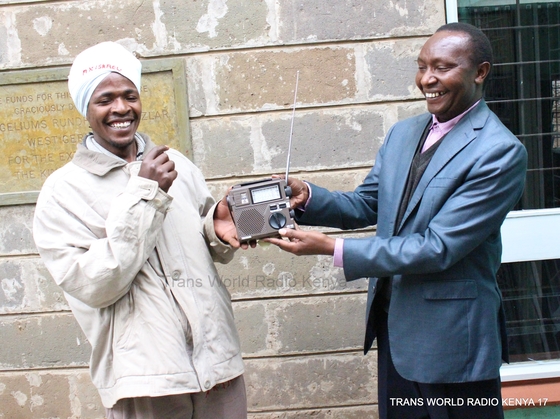 All smiles as Pasor James hands Ibrahim a Tecsun Radio

It was indeed a red letter day in the life of Ibrahim as in the morning when he began his journey from Muthaiga in Kiambu county his mind was set that he was coming to collect books. Little did he know that God already set this day for him as a day he was going to meet his Radio pastor. One could not afford to miss his glee filled face when finally met pastor James to personally thank him for leading him to Christ and blessing his spiritual life. Pastor James on the other hand was really encouraged by the visit and was happy that he was able to introduce Gitau to the online TTB link and to also learn that he led him to Christ.

As the producers of Dorothy Daily Devotion in Gikuyu language we were really encouraged and motivated of how a short devotional program can have a long lasting impact on the life of our listener to the extend of him even recording the episodes on his phone. On behalf of Trans World Radio Kenya we would like to thank God for the long partnership we have had with Richard & Dorothy Bennett through their Cross Current International Ministries (CCIM). Its through this partnership that we have been able to have the program and distribute over 5000 bibles, over 50,0000 copies of Devotional Books likeFood for Faith, Quest for God, & The Love of God and over 10, 000 copies of “Hope for the Hopeless” AIDS tracts. All these distributed in English, Swahili, and other local languages like Taita, Boran, Turkana and Gikuyu.

For spiritual nourishment, you can now listen to Dorothy Devotion through the following channels.

Would you like to share your testimony how our programs have blessed your life write to us an email letters@twr.co.ke or SMS +254707 032 060