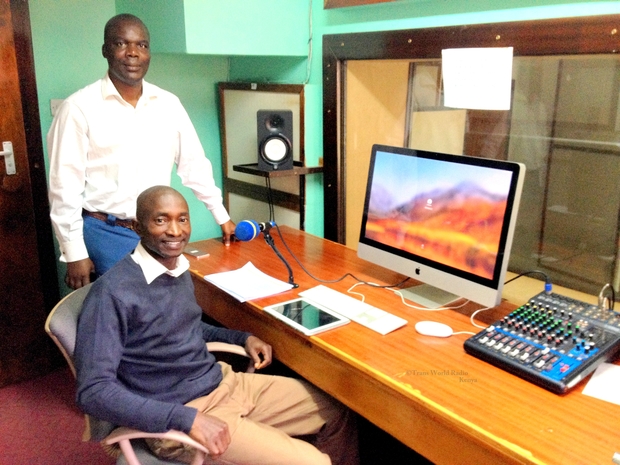 Moses Gikaro with a TWR Kenya Producer in the studio

For many years the above signoff slogan (It’s me your Pastor… & the Word will continue) for one of Kenya’s most listened to through the bible radio series in Swahili, commonly referred to as Neno became a house hold program taking the listeners for transformative journey through the bible from the book of Genesis to Revelation. It was in the early 90’s and the broadcasting technology had not yet advanced as today. We only had the International Short Wave broadcasts and the Government’s National broadcaster KBC Radio that covered most parts the country. During this period, every weekday at 10:30 AM attention focused on Neno, a through the bible series in Swahili. Just like any other area in Kenya, Mutiniti village in Ntimaru West Ward bordering Kenya and Tanzania’s Serengeti region, the only Radio station that they could listen to at that time was KBC Radio & the Kuria community became great listeners of Neno.

Fast forward to the ‘Mutiniti community rapporteur,’ recently as I went around the daily activities at the Audience Relations Department, received a call from gateman informing me that there was a visitor at the gate who would like to deliver a message to the Producer of Neno Litaendelea. I immediately requested that he directed to the Audience Relations office. Few minutes later, a middle-aged jovial man walked into the office, as I stood and stretched my hand to welcome him, he stretched his with broadening smiles all over his face. “I am Moses Gikaro from Mutiniti village in Ntimaru Migori County,” he said in response to my introduction.

After a brief introduction, he went further to explain the reason for his visit.

*“ I am very happy, today I have finally been able to locate you after very many years of being blessed by your programs. I started listening to your program Neno Litaendelea when I was still a young boy. My father also loved the program and I remember that every day I would ensure that my father’s Radio had enough battery power to last throughout the program. Those years Mutiniti was still a very remote village and the radios were few so you would find the village homes that had radio would listen to it together. We are a minority group so it is as if the whole community was listening.

Personally, I would say the program helped me to grow spiritually and made me understand the bible more. It is easier to read and understand a bible verse after you have already heard it. Later on other FM’s stations came up and the program also disappeared from KBC. Years have passed and I went ahead and pursued a career in Guidance & Counselling so I came back to give back to my community in this field.

By the nature of my work, I always get an opportunity to be a speaker or play a role in community mobilization forums & gatherings and one question that has always come up is “Have you found out where Neno went to?” Since most people here know that, I occasionally travel to Nairobi they tasked me to locate Trans World Radio Kenya offices and ask them, where is Neno & what it will take to bring back Neno Litaendelea to the Mutiniti Community. I am grateful to have found you, thanks to modern technology and am sure the rest of the community will be happy to know that the long search responsibility for Neno Producers has ended today.” Moses shared.*

After a short digestive hiatus, I asked him why there is still thirst for the Thru The Bible series despite the many different radio devotions being broadcasted presently and this is what he had to say.

“It’s true there are many preaching the gospel on air but still it can’t be compared to Neno in fact those Pastors who are preaching the true Gospel of Christ are the spiritual fruits of Neno. In short, I would say Neno is their father and that is why am ready to even donate a piece of my land for you to raise your masts or set up a studio so that Ntimaru and the entire Kuria community can continue with Bible journey. It’s something we have also talked about during our gatherings”

Later on Moses was more elated to get a studio tour and shake the hands of Neno Producer sister Pamela Omwodo. Something he never had imagined would happen in his life.

On behalf of the ministry, we forever remain grateful to our listeners who have always taken their time to share their testimonies with us. Although broadcasting technology has improved and thus you can now get Neno on TWR Kenya’s FM Stations and through her collaborating stations, or continue the bible journey online through [https://ttb.twr.org/neno] or TWR360 phone application. However, we are cognizant of the fact that not all have moved digital and there are areas that have poor or no internet and we remain hopeful that God will provide the resources needed for us to reconnect with our long time listeners & networks. We are grateful and thank God for a listener like Moses for contacting us with a need at the same time coming with a possible solution.

The Kuria community is one of Kenya’s Bantu minority community divided into four different clans Bairegi, Banyabasi, Bagumbe and Bakira. According to the last data from Kenya National Bureau of statistics 2010 Census, their pupation stood at 260,401