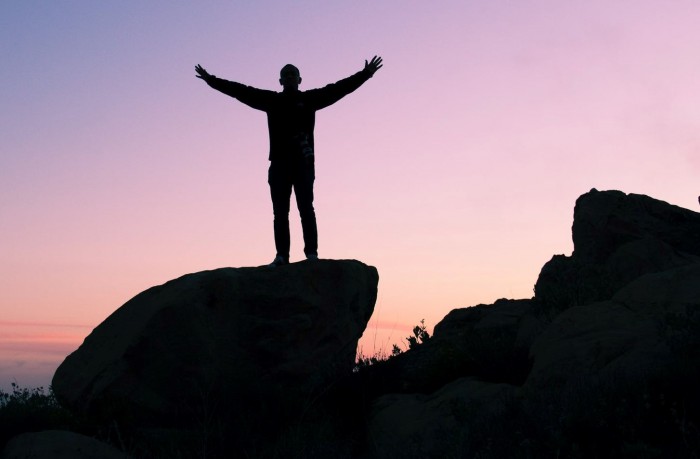 From being left paralyzed after getting knocked down by a naked cleric then God using a blind Evangelist to heal him after nothing seemed to work to later embracing Christianity and going to evangelize in a territory hostile to Christians. That is succinct introduction of our Neno (Thru The Bible) listener Pastor Abdul Aziz’s (not his real name) testimony.

Sometimes in the late 70’s in Obbo village in Yabello Southern Ethiopia region a bouncing baby boy was welcomed into a Sheikh‘s family. “I was born and raised in a Non Christian family. My father was a Sheikh from Ethiopia and had two wives with 16 children.” Pastor Aziz kick starts his testimony.

Pastor Aziz vividly recalls when he was around five or six years, a tragedy happened to him, a tragedy that would change his life forever. In the next village there was another Sheikh who was his father’s rival and he was too young to understand what caused their differences yet they were both Muslim clerics.

“I remember one morning after my father had just returned from the morning prayers and decided to rest on his bed in our *Manyatta(a thatched mud house), suddenly the rival Sheikh entered into the room naked and walked to the center of our round house. My father was keenly watching him and he reached out for his bakora (rod) to scare him away and as he fled from my father, he trampled on me at the entrance. My dad came to my rescue, only to find that I was severely injured. Right there and then I became paralyzed, I don’t know which charms the man was carrying that led to my state.” Narrates Pastor Aziz.

“After the incident, I became very sick for the next six months and the family tried everything at their disposal to treat me but it was all in vain. My parents even sought the help of witchdoctors, traditional healers etc but nothing was forthcoming instead I got worse.

The family was on the verge of giving up then one day my mother suggested to my father that she had heard that there was this blind man moving around the village preaching and healing people in the name of Jesus Christ. My father was in a state of limbo, his religious beliefs and leadership restricted him from welcoming the blind preacher and on the other hand his son was on the verge of death and he had to make a decision on whether to save his son or his religious restrictions.

My father decided to sacrifice it all for me and allowed my mother to call the man of God who was later invited into our home, prayed and the family witnessed a miracle.

The first day after the blind Preacher had held a fellowship at home, I turned from one side to the other while on my bed. Ooh! My mother thought I was dying and those were my goodbye kicks. I had never done this on my own for the past six months while on that bed. She cried out saying, “he is dying, he is dying” as she looked for my father. My father came only to be surprised to find that I was still breathing. It had not clicked on them that God had answered the prayers and my healing journey had just begun.

After one week, I was back to my feet, I could walk and seat without any support and the Pastor came back to check on me and discovered what the Lord had done. It was a joyous moment and my father allowed him to take me round the village proclaiming how Christ had healed me after everything else had failed

That is how I received my healing and salvation that also saw the establishment of a church in our village, thanks to the Most High, the risen King of Kings who was able to defeat sickness brought by witchcraft and lead me and part of my family to know Christ’s healing powers.

Later on, the man of God took me to school thus making me the first and only child in a family of 16 to acquire formal education. At Grade 5, I was linked to some German Missionaries who enrolled me to their education program. I joined a school in Moyale. While in high school, I started to encounter my first challenges of being a young believer in an area where Christianity is not readily embraced. Life was not easy and I remember that on various occasions some of my classmates tried to make me renounce my Christianity. It was not easy because I knew where God had taken me from. At that time I loved the listening to God’s Word and I thank God for Trans World Radio’s Neno Litaendelea through the Bible radio series and at that time it used to run on the National Broadcaster KBC Radio the only local Station that could reach the area. It was my only source of strength, hope and pillar to my faith. The program was very deep and helped me to grow spiritually and understand the Bible. Fast forward, after school I came to Nairobi through the mission team and was enrolled to a Bible School and later graduated.

Taking you back to Neno, I still remember in 2003 I went for a mission to a town under a Somalia territory. I stayed there for several months. My thirst for the word of God grew deeper and it was suicidal to be identified as a Christian. Therefore, I had no option but to pretend that I was not different. I could not read or carry a bible but I thank God I was be able to receive the TWR Short Wave Broadcasts as well as the National broadcaster radio signals. I was able to continue listening to Neno; it was my only source of hope

When it was time for the Neno Litaendelea, I would sneak to the nearest bush with my radio so that I could listen to the Program and during prayer times I had to join the rest but pray to my God

I am grateful that after very many years of listening to Trans World Radio our paths crossed through their FM network and God also led me to establish a ministry and through it we have worked together to spread the gospel.”

As we end the conversation, Pastor recognizes and appreciates the fact although his father died without renouncing his religion he appreciated and respected his belief in Christ. Her mother on the other hand believes that since her husband died without changing religion, she would not betray him in death. Thanks to his miraculous healing, the family has some religious tolerance and respect for one another and some of Pastor’s siblings have fully embraced Christianity.

Currently, Pastor is among those who have been helping the needy in the society with foodstuffs, beddings, clothes, handwashing equipment and other support during this Covid-19 pandemic period.

Do you have a testimony of how our programs have changed your lives ? share it with us today barua@twr.co.ke