Kenya may boast of having had a tremendous growth in the Radio industry by having over 100 Radio Stations broadcasting in the country, reaching 32 million Kenyans. However thanks be to God none of these stations can claim to have very passionate and loyal listeners like those of SIFA 107.7 FM VOI who to prove their loyalty have four fans clubs presidents. 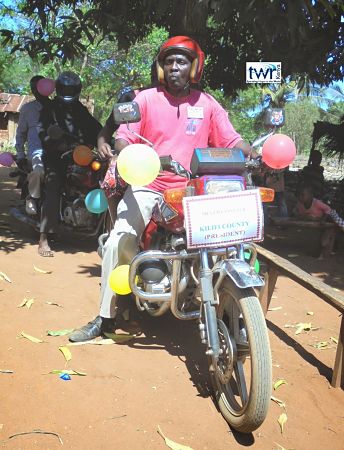 Trans World Radio Kenya may have began preaching the gospel in the East Africa in 1976 but it was not until we got to the new millennium when the government allocated seven frequencies to the organization after days of prayers and fasting.

After the prayers were answered TWR Kenya begun the difficult process of establishing FM Stations in the allocated regions and thus SIFA FM Voi also referred to as the first born child of TWR Kenya and mother of the other four live stations, begun its operations in Voi in July 2008 at that time being hosted by Scripture Mission. The devil was not asleep for as soon as the station went on air started to gain root, new technical and content challenges emerged and the station went off air for seven months. This prompted for more hard work, prayers and fasting from the listeners and TWR Mission. The devil was defeated as the station overcame most of these challenges and we later came to learn that despite the challenges God was already using the station to bring the people together and positioning the station in their hearts. This can proved by the fact the Station is the only station in Kenya that has listeners who have teamed up together and formed fans clubs in four areas namely Oloitoktok, Kilifi, Voi and Bughuta each club headed by a Rais (president in Swahili) and have their own ministers and ambassadors.

Today we are privileged to get the story of Kilifi Fans Club headed by “President” Pastor Safari Beja. Born in Kilifi on 11th December 1963 on a day when Kenya was hours away from gaining her independence, Pastor Beja has spent nearly all his life in areas around the coast. He worked for a sisal firm called Rea Vipingo located near Kilifi town. After his job ended he moved from the town to his rural home in Bamba. Fast-forward in 2008 when Sifa begun its operations as everyone else he used to tune in like any another person since it was broadcasting the gospel in Swahili a language. Pastor says that he used to listen but he was not active in sending text messages to the station until when one day when Sifa run a promotion of rewarding her loyal listeners with solar powered radio. When he heard that Mr. Julius Kenyatta, a listener from Kilifi area (whom he had introduced to the station) had emerged the winner, he was greatly inspired and his passion to be a loyal listener grew and promised himself to be the number one listener even if he won’t win a radio. First he begun by ensuring that his radio was permanently tuned to 107.7 and made calls and sent text messages to the station to contribute to programs, called to say the opening prayers every morning and sent greetings to his fellow listeners who also called to greet him back . As this trend continued Pastor Beja’s name and telephone number became a household name.

Pastor remembers the dark period when the Station had a technical challenge and had to go off air , he would call the Station manager to encourage and pray with her about the situation, it was the most trying moment. Thanks be to God the prayers were not in vain the technical challenge was solved and pastor Beja committed himself to help SIFA get back her listeners by cycling around Kilifi County informing them that Sifa Fm was back on air and also committed to awarding airtime to listeners who answered correctly a daily voice trivia.