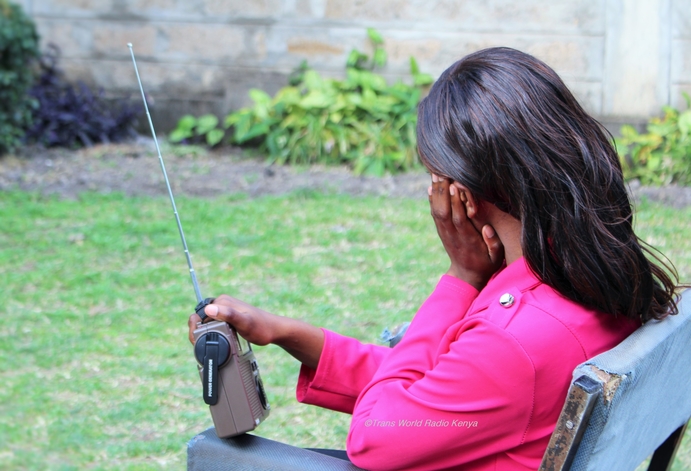 At the age of 20 Betty Nekesa had lost hope in life, she had just come from a broken marriage and left with the burden of taking their four children with the last-born being only three months old.

She says it was because of irreconcilable differences and wishes not to talk more about it or about the father of her children. 10 years ago, she decided to park her belongings and leave with her children to her parents home in Western part of Kenya. Despite the hopelessness, she was sure that only her parents would help her in picking up the pieces and get move on with life. They were her only source of hope during this dark period.

They were warmly welcomed and she quickly settled, the place had been her home right from childhood. During this the time she became closer to God thanks to Trans World Radio Kenya’s The Through The Bible (TTB Swahili) Radio program commonly referred to as *‘Neno Litaendelea.’ Her parents always ensured that the family listened to the program whether they were in the farm or in the house at that time the program used to run on the National Broadcaster KBC Radio. Her hope for better life was strengthen through the Radio sermons and the family love.

Fast forward to 2018, early this year Betty traveled to Nairobi to look for work to continue providing for her family. She went to live with her sister who introduced her a bureau that registers job seekers who are willing to work as house servants and she was very grateful only a day after registering, the bureau had already located a family that was looking for a house servant. She was happy to receive the call from the bureau and reported there to get more information. Her joy reduced when she was told that the family she was going to work for lived in the Northern part of Kenya not very far from the Kenyan Somali border and they were Non-Christians. Alas! She was in a limbo of not taking the offer and continue to struggle to provide, or just take the offer hoping that all will be okay. She trusted in God and took the job.

She then embarked on the over 500 KM journey from Nairobi to her new work place and the welcoming she got from the family amazed her. She had never imagined that they would be that welcoming to her because of her religion. During the orientation, the family made it clear to her that they respect her different religion and her job description included working every day and not leaving the compound unless permitted. She consented to the terms.

Days later, it dawned on her that she was in place where she could not go to Church and to make it worse she had left her bible in the village. “How am I going to quench my thirst for the Word or be encouraged with words of hope? She wondered. Then one day while performing her morning chores she bumped into a TWR Kenya devotional Program on a TWR Kenya FM Network for the North Eastern region.. “ Haki sijwahi furahi hivyo, kwanza baadye nikaskia sauti ya Mchungaji Geoffrey Wanjala Munialo tena baada ya kunipotela Neno Litaendea.” (For real I have never been that happy and I was more excited when I heard the voice of the Thru The Bible Pastor whom I had kept on wondering where he had disappeared to). Betty said in Swahili.

*“Your station is now my church and great source of hope. I am no longer bothered that am not allowed to go to church and I have really been blessed by the morning devotions and the show presenter, he is truly God sent servant to our rescue because most of us in this area we are not allowed to go out to worship or interact. Programs like Dorothy Devotions Swahili, Matumaini (Heralds of Hope), and Neno Litaendelea(TTB Swahili) have completely quenched thirst for the Word and given me hope even as I live far away from my family. The station is a huge blessing and every morning the presenter shares the word and allows us to share the prayer requests and we pray together and I have heard many call back to testify how their prayers were answered me included. For example, I have been praying for a bible, one day I dreamt that someone had snatched a bible away from me then as I shared the dream on air as a prayer request. Days later I dreamt that I was being directed to read a bible verse and I was about to open my bible my boss came to wake me up. Later l was linked with the TWR Kenya office; they gave me a Swahili bible.*Betty continued

Out of my excitement and blessing, I remembered how my parents loved listening to TWR Kenya programs. I started calling back home in the village over 1000 KM away telling them that I had found the station where the TWR pastors went to and they tried to tune but they were un able and I thought may be they were not keen in the tuning and they were missing on the blessings . Its only today that I have known that the FM does not go beyond North Eastern region.” She recalled.

On behalf of Trans World Radio Kenya we would like to thank all our friends and partners who have always supported us financially or through prayers even as continue to take the Gospel to the unreached through our FM Network. Betty’s testimony is a representative of the many transformed lives. We pray that God will continue to use TWR Kenya Fm network to speak hope to the unreached and those stuck in hopelesness.

"Have I not commanded you? Be strong and courageous. Do not be frightened, and do not be dismayed, for the Lord your God is with you wherever you go."**Joshua 1:9

*We used a file photo have changed the listener’s name to protect her real identity.