Huddled in a tin shack small room, sits Axcel Niyubahwe a refugee from Burundi. Axcel, or Baba Tiyena as he is fondly known at the Kakuma refugee camp, is with a about 10 adults and a few children in the small room. There is pin drop silence as they listen to the small radio in the corner of the dark room, it blasts the voice of Pastor Geoffrey Wanjala Munialo.

The broadcast is occasionally interrupted by the sound of a child crying or a motor bike blasting music as it passes outside the room; but this does not deter the occupants of the room who are listening very keenly to Thru the Bible in Swahili (Neno) through Atoo Sifa, the newest TWR Kenya FM station based in Kakuma refugee camp. 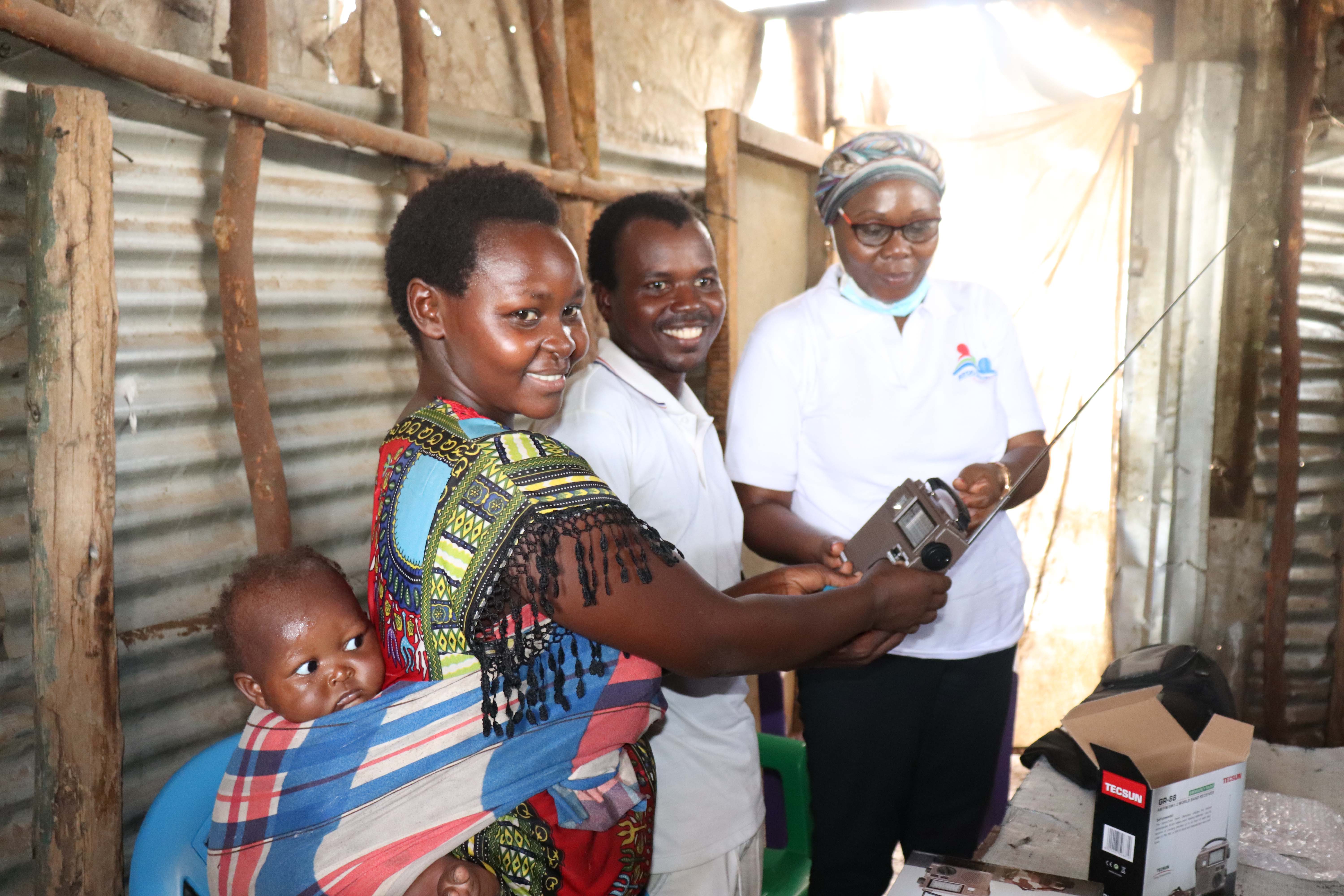 The food kiosk with the gathered crowd

In another part of the refugee camp is a general shop which offers a variety of products and services to both the camp’s residents as well as the host community. The shop is owned by a Kenyan national David, close by, is his phone blasting one of the Neno messages which he listens as he continues to serve his customers. David listens to TTB Swahili through the TWR app on his phone which he is very happy to show us how he gets it on his phone.

These are just two of the Neno listeners who are excited to have Neno on air on Kenya Broadcasting Corporation. Atoo FM started airing the Neno program on the same day that TWR Kenya put back the Neno program on the national broadcaster KBC at the beginning of November. Unfortunately, KBC does not reach the Kakuma refugee camp and Atoo Sifa fills the gap very well.

This has brought so much excitement in the small Kakuma town, A few of the listeners remember the program from the days it was on KBC more than a decade ago, others are happy to hear it for the first time and they are now faithful listeners and frequent callers to the station.

Unfortunately, KBC does not reach the Kakuma refugee camp nevertheless, Atoo Sifa fills the gap very well. This has brought so much excitement in the small Kakuma town.

A few of the listeners remember the program from the days it was on KBC more than a decade ago, others are happy to hear it for the first time and they are now faithful listeners and frequent callers to the station.

Baba Tiyena and his wife have been living as refugees in the area of the camp known as Kakuma 4 for two years now. They open their tin shack food kiosk which doubles up as an Atoo listening center before 5 am every morning, he makes sure that first his radio is on so that the first clients will listen to the Neno broadcast at 5 am as they have their breakfast.

During the day, he will invite other listeners who do not have radios at home to come and listen and later discuss what they have learnt from the broadcast. On Saturdays he gathers all the children around the camp where he lives along with his toddler daughter Tiyena to listen to the TWR children’s show which includes Hadithi Hai (Bible Stories Alive).

A few of the TWR Kenya staff led by the National Director Bernice Gatere and the Sifa General Manager Pamela Omwodo, visited some of the the Atoo listeners who are also ardent listeners of the Neno program. Baba Tiyena had a lot of good things to say about the program.

“I am a refugee from Burundi and together with my fellow refugees, as refugees, we find comfort and encouragement listening to the word of God every day through Atoo Sifa…”

The TWR Kenya and Sifa team gave Baba Tiyena a wind-up radio to use in his food kiosk and he was very excited.

"Now I do not have to worry about batteries. I will just wind and listen to my favorite program.” Baba Tiyena

In other parts of the country, the excitement is just as high as in the refugee camp. One of the listeners from the time the program was airing on KBC in the 90’s wrote on social media.

“I am excited to hear my favorite program back on air, I usually will not wake up at 5 am but for Neno, I will. This is how I start my day.”

TTB Swahili or Neno litaendelea as its fondly known in East Africa is back on KBC every morning at 5 am from Monday to Friday.