On 2nd July 2008 Trans World Radio Kenya officially kick started a mission of faith to reach the unreached in a marginalized arid region.

TWR Kenya was given the green light to broadcast on 101.1 FM in Marsabit after a long wait and chain of prayers. Despite 2008 being seven years into the 21st century it was had to imagined the marginalization had soared instead of reducing.It was aslo hard to envision that TWR Kenya was going to set up a Radio station 532KM away from the office, in a arid area where there was no proper infrastructure like transportation, communication, sewage, water and electric systems and the nomadic community battles over the little resources were the order of the day. In fact the only affordable unsecure means of Transport was being ferried in a lorry that also had livestock in on dangerous dry terrain the other alternative was the occasional light aircrafts.

Despite all the negativity on going in a marginalized TWR Kenya did not give up for it understood and accepted that there is a reason why God had opened a door in Marsabit after days of prayers, fasting & passing the patience test. Yes, with the help of the local community, global friends and partners of TWR International. TWR Kenya set up a small studio in the town and put in a 250 watts transmitter and raised a mast on the rooftop of a tank caging belonging to a Teachers SACCO. Pre-recorded programs from Nairobi were then sent on CD and played until 3rd October when TWR Kenya sent Angaya Avedi from Nairobi to kick start the live broadcasting, his experience is a story for another day.

With that succinct biography in mind we can now fast forward and share some of transformed lives testimonies and the impact of Sifa Marsabit 101.1 FM. 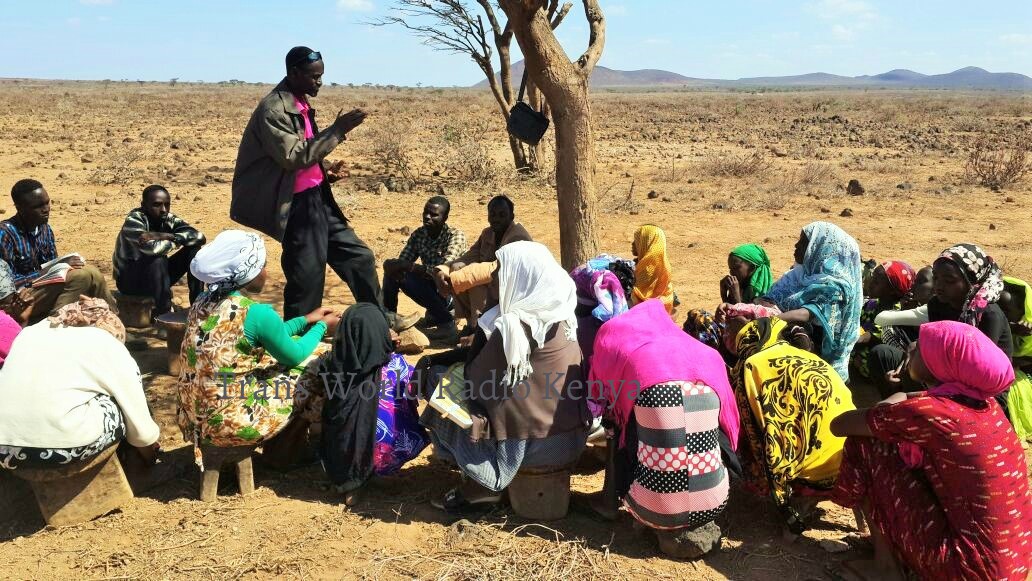 Pastor Joseph Baye who is a missions team leader,retired teacher and volunteer producer and presenter at Sifa FM Marsabit had been burdened by the challenge of his pastoralist listeners from Oronder village in Bubisa location when it came to a having a place of worship,they were worshiping under a scanty leafed tree despite the high temperatures. The residents of this village are internally displaced persons who were affected by inter-clan clashes after the 2013 General Elections in Kenya.

Through the Station Pastor Baye teamed up with the staff,local churches, religious leaders and well-wishers to resourced for the construction of an interdenominational Church so that the nomadic listeners from Oronder village could have a House of Worship. The Manyatta Church was completed last year and worshiping in it begun this year. It's is the only Church in the area and it serves over 100 households.

Other than his 30 minutes devotional program sloted within the Mad-jirena Morning show on Mondays at 8:45AM, Pastor Baye also known as Mwalimu Baye (teacher) and the rest of the staff usually do a door to door missions by ministering and providing Swahili and Borana Bibles to the listeners. With the latest outreach being last month when Station teamed up with other well-wishers for food donation & distribution exercise as result of the ongoing drought situation in most parts of the country.

Transformed lives
**Artist: ** **"**Am a father, 41 years old and a very loyal listener of SIFA FM Marsabit. I was a drug addict and through one of your devotional programs, I was led to Christ in 2009. Through the station I was also able to get a Borana bible and a Tecsun Radio. I also know of another person despite being a leader in another religion, the programs led him to Christ and he fully embraced Christianity ( a totally new religion to his life ). Just like him Christianity is new to me and we ask for your prayers and more spiritual guidance. My life has been transformed thanks to the Station. Am now an artist and I compose and sing songs and partly participate in acting for program where SIFA & BBC Media Action have partnered to sentize the community on Hygiene (WASH Program)."

Student: "Am a high school student here in Marsabit County and through my friends I started listening to SIFA FM and loves it. I later accepted Christ and embraced Christianity. For a very long time I was lost and did not have someone to guide me spiritually and this became even worse after my parents separated because I also lacked parental guidance. But now through SIFA FM I have discovered a sense of belonging."

SIFA FM Marsabit has currently moved from the 250W transmitter with a 15 metres mast on a roof top to 1000W with a 30 metre mast on a hill reaching over 300 KM up from 150KM even by extension the signals can even be picked parts of neighboring country of Ethiopia.

We would like to say thank you to all our friends and partners who have continually supported our FM Network missions in Marsabit, Lodwar, Garissa, Wajir, Lamu, Voi, and Mandera. Indeed your Prayers, Financial and Material support have helped transform lives in these unreached regions also through your support local dialect bibles and Christian literatures have been distributed, the communities have been empowered through devotional and developmental programing, the areas has been open up for developments and more organizations and government institutions and offices have been opened up and infrastructure like tarmacked roads, communications networks have greatly improved and the clan clashes have gone down. Previously as a Kenyan when you visited this areas the local would tell you when you go back to Kenya take back our greetings for they regarded themselves as those who lived in a no man’s land far from civilization.

Indeed the journey of faith continues and Proverbs 16:3(Amplified Classic Edition) reminds us to…“Roll your works upon the Lord [commit and trust them wholly to Him; He will cause your thoughts to become agreeable to His will, and] so shall your plans be established and succeed.”

Left- Sifa FM Staff Rosemary Bokayor(in stripes) handing over a Borana bible to a listener & right woman infront of her Manyatta holding the traditional stools used in the church.

*A Manyatta is an oval structure made of sticks,, cow dung and mud paste and animal skins and usually used as a temporary shelter by the nomadic communities.