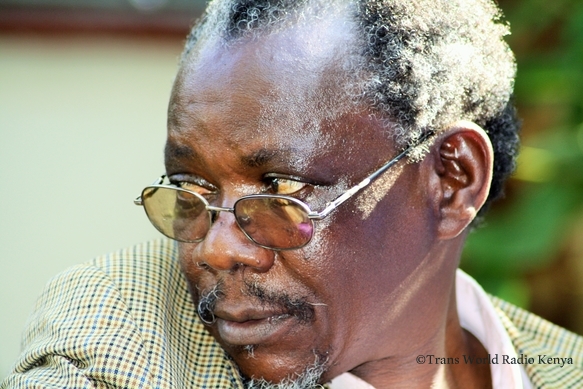 News of the sudden death of Reverend Geoffrey Wainaina continues to shock many who knew him. Despite hitting 65 years and battling diabetes he was always full of life. As a former bible teacher with the Baptist Church, whenever he would be called for a mission or to mobilize pastors he was always ready to make sure everything goes on well as planned.

Rev Wainaina relationship with Trans World Radio Kenya started in early 90’s when TWR Kenya founder the late Rev Stephen Boaklye Yiadom & Pastor David Mungai (then serving as the Personal Manager / Chief Programs Producer) set out on a fact finding mission to Eldoret to prepare for a series of Radio Rallies and pastors trainings. They then booked appointments with bishops leading some major churches in Eldoret like Deliverance church, African Inland Church, Good News Church of East Africa, Reformed Church and Anglican Church of Kenya Eldoret diocese to go and share the missions ideas. Surprisingly when they visited the clerics they welcomed the idea and they told them that for good mobilization to happen in Eldoret and any another surrounding areas they needed to look for a pastor called Reverend Wainaina who also had an office in Eldoret town. At that time Reverend was a bible teacher and at the same time running a business of supplying schools with laboratory chemicals and equipment.

Later the TWR team met Reverend in his office and they shared the idea of having missions in the area, an idea that he quickly welcomed and he even suggested that they can start one that day. He immediately picked up his landline phone and started calling for pastors for a training in the afternoon and by the end of the day 50 pastors had extemporaneously been assembled.

Fast-forward, in 1999 Reverend joined the TWR Kenya ministry as a producer for a new Radio bible series called Insight for Living commonly known as ‘Busara’ in Swahili and when the project abruptly ended in 2003, the mission had established a new department called Church Relations and Reverend became a volunteer to the new department. His main role was to link the ministry to the pastors and their congregations who are also our listeners. A job that he zealously performed until he breathed his last on the night of 16th November.

Through his wide network, Pastor was able to easily introduce many to the ministry as well us help the Audience Relations department organize listeners get together and distribute bibles and source for evangelism materials. Here are some of the tributes from those he worked with.

** Bernice Gatere- TWR Kenya Executive Director.**: Reverend dedicated his life to work for Christ. He has left a huge gap both to the family and the Ministry but we trust in the Lord he passionately served to help us fill the gap. I remember when his program ended in 2003 he came to my office and we talked of how we could get support and establish more relationships with churches and pastors because their congregations are the greatest majority of our listeners. At that time we had established a Church Relations department and Rev. Wainaina requested if I could allow him to volunteer in the department even if it didn’t have a budget. That’s where he served until when God called him home. It’s hurting that we will miss him here on earth but we know that when we all get to heaven we are assured we will be connected again as long as we continue living as believers. He has left a colossal mark and an example to his fellow pastors through his life in ministry especially during this era where some have put money first and turned ministry into business.

Pastor James Karichu- Producer Rugendo (TTB Gikuyu): I first met Reverend in Naivasha 1985 when I was still in high school. At that time he was already a well renowned Bible teacher with the Baptist church. I still remembers how he gave an indepth teaching of the bible and I would later on again attend more seminars and rallies that he had organized or coordinated. He was a very vibrant and flexible man of God. Our paths would again cross when I joined Trans World Radio Kenya as producer for Rugendo (airs on Coro FM every weekday at 10:30 AM) and we shared the same office for a long time. I still remember how we always reminisced the good old memories. I also learned a lot from him. I will miss him

Pastor David Mungai- Producer Herald of Hope (Matumaini): I have lot of good memories I would share about Reverend. I still remember our first encounter in the early 90’s when I was serving as Personnel manager/ Chief Programs Producer. My boss the late reverend Stephen asked me to accompany him on a fact finding mission to Eldoret because there were plans to organize for pastors trainings and radio rallies. We had listed some key churches that we intended to work with and also identified prominent members of the clergy like the late Anglican Bishop Alexander Kipsang Muge, Bishop George Gichana of Deliverance church Eldoret and leaders of Reformed Church of East Africa, Africa Inland Church, and* Good News Church of East Africa***. Surprisingly when we met the pastors they recommended that we look for Reverend called Wainaina, then Bishop Gichana linked us to him.

We met him in his office and when we shared the idea for pastors trainings he said we can have one the same day, we were a bit skeptical how it would be possible to get a quorum but the next thing I remember is he started making phone calls and few hours later Rev Stephen and myself were there training over 50 pastors.

We would later make several mission trips to different parts of Rift Valley, Western, Central & Nyanza provinces all courtesy of Rev Wainaina’ s networks. I remember his desk was full of books and a bible and whenever he was invited for a meeting even on short notice he would ensure that he didn’t disappoint. He just grabbed his bible hopped into his car and drive off, if only that car would speak then you will realize how his driver mastered routes and sometimes created access routes to impassable areas just for the gospel. During the day we would be together facilitating a training and in the evening as we go to our rooms to sleep you would hear him say I am going to preach tonight somewhere in Western and he would bid you bye and off he goes driving even over 200 Km away. I remember these words by Reverend George Kungu of Eldoret Baptist church during one of our meetings, “Pastor Wainaina can drive you until where the road is no more but you still move.”

I still remember how he personally counselled my brother when he was undergoing a life situation and as a family we will forever appreciate him for that. We also can’t forget his love for roast meat and suits as his dressing code. I will miss and treasure the moments.

Enos Changulo- Resource Mobilization/ Church Relations Executive-: As someone who worked in the same department with Reverend, he has really left a huge gap. He was always ready to go into in all lengths to ensure everything worked out well. The news of his death came when I was in a pastor’s conference in Voi, we were supposed to be there but few days before he called me and told me he was not feeling well but if he got better he would accompany me to the training. The death was sudden to me but he gave out his best until the last day. I didn’t know he was struggling with diabetes until one day when collapsed when were we meeting pastors but immediately he got the energy to stand he was ready to move on as if nothing happened. May he RIP.

Precious in the sight of the LORD is the death of his saints. Psalm 116:15