With the onset of rains in most parts of the country one would easily assume that the prong longed drought situation that had been experienced early this year leading the government to sound the alarm that 2 Million Kenyans risk facing starvation, has been dealt with.

However for Kenyans living in some parts of Igembe South & Central areas along the Meru – Isiolo borders drought is not past tense to them but it’s the present daily threat despite other parts of Meru County being known to be agriculturally viable and receiving enough rains.

The prolonged drought in these areas has greatly affected the education sector and churches fellowships because the congregations are spending more time looking for water and food. Burdened by the cries of his people Pastor Ibrahim Shaffie, a close friend and partner of Trans World Radio Kenya sent out appeals for help as pastors and school heads continued to approach him to help salvage the situation.

As a result of the numerous calls for help, Pastor Shaffie has been contacting all those he thinks can help. Among those whom he has reached out to is Trans World Radio Kenya Executive Director Bernice Gatere and he sent his request for prayers for rains and appeal for food donations from well-wishers. Together with TWR Kenya staff Director Bernice took up the prayer burden as she shared the need during the morning devotions as pastor Shaffie continued reminding her “Endelea kupiga mayowe, watu wako njaa” meaning continue wailing to the Lord the people are starving.

The country wide shortage of maize flour has made situation worse and although the government has stepped in by introducing subsidized maize flour. The residents of these areas have not benefitted from the subsidy as it’s not readily available even in the capital city it’s a struggle to get the flour.

We thank God for our partners, for in late May Director Bernice received a call from one of TWR Kenya partners and they were willing to support. Having set all systems go with help of Pastor Shaffie, the team comprising of Geoffrey Otieno, Fanuel Angote, Desmond Kodongo and Robert Waneno embarked on the over 300 Km journey from Nairobi to Meru Isiolo borderlines

After the long drive the team finally linked up with Pastor Shaffie and his team at African Inland Church (A.I.C) Githu along the Meru Maua road. The church which falls under AIC Igembe South District Church Council has 14 Churches under it and was going to act as the main distribution center for the food donations. Most of these churches are located in the drought stricken areas of the county. After pastor Shaffie handed over the 70 bundles maize flour to the Pastor in charge Pastor William Karango, together with his team we set out to the next distribution center in Laikumukumu area in Imenti Central Constituency and it was this point that we encountered the harsh reality that drought is real.

As we drove through the dry dusty terrains, we continually slowed down to give way for donkeys that had jerry cans hanging on their backs in search of water as their guides followed. Pastor Shaffie having served in the community shared with us how the area has not received seen rainfall for almost 4 years now thus making even tributaries to dry up. Also narrating how it was difficult for him to get the maize flour due the countrywide shortage. The government has put strict measures on millers to ensure that unscrupulous businessmen do not continue to hoard the little that is available. He tried getting the flour through the County commissioner but his requested was granted only on condition that he gets one bag instead of the over 50 that he needed even his pleas that it was for emergency relief support fell into deaf ears. With the help of his networks he received information that a businessman had imported cereals from the neighboring country of Ethiopia and that is how he was able to get some of the flour and cereals that were distributing.

After the meandering terrain we finally got to AIC Laikumukumu where we found Pastor Joseph Nthiothe had already mobilized his congregation. Looking at the faces of the men, women & children one would not fail to notice the despair written all over their faces that was later to be replaced with big smiles and songs of praises when they distribution exercise started. The situation was not any different when we arrived at AIC Kabaune and Kibaune Primary School.

On the second day the distribution almost stalled when we the millers who had promised to sell cereals informed pastor that they had run out of stock but we than God we finally got the cereals after several phone calls and with the help of Mr Silas Mbijiwe the head teacher at Marere Primary school and a good friend of Pastor Shaffie. After loading the cereals we set begun the distribution journey and this time targeting schools along the Meru Isiolo borders and Pastor had targeted 8 schools that were in dire need due to the poor road network & time constraints the lorry could only make it to 3 out of the 8 schools. The rest of the schools would get the donations later as it would have to be transported on motorcycles.

Songs of praises and excitement rented the air as we visited the schools. The teachers were happy that at least for the next coming weeks the students population will resume normalcy as most of them don’t come to school when lunch is not available. Instead they help the parents in looking for water and manual jobs to get money for food as confirmed by Rwerwera Primary School head teacher Mr. John Mwiti Mwei. Sentiments also shared Mr Silas Mbijiwe and Karumanthe Primary School deputy Mr Julius Kerimi.

Although this distribution acted as a temporary relief to the beneficiaries, we thank God for the provision & may God bless Pastor Shaffie and our partners who made this journey possible at the same time we join hands with the pastors, teachers, and the residents to pray for rain in these areas. At the same time we hope that the government will do more to help in sustaining the school feeding program and ensure that the current subsidized flour is available in these areas. 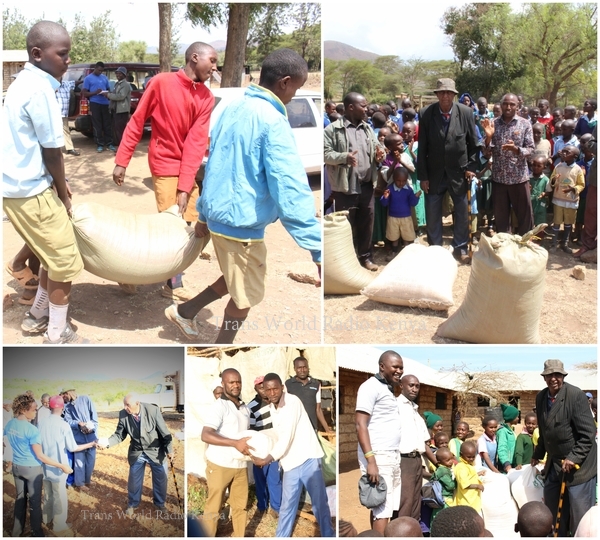