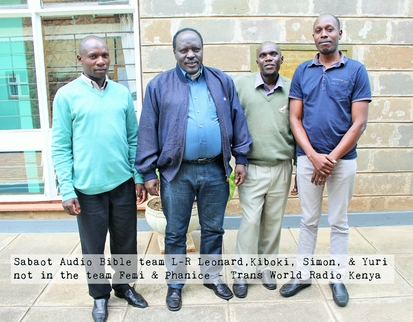 On June 6th in 2012 the Sabaot tribe celebrated the official launch of the Sabaot bible after years of research, editing, translation and printing. This was a welcomed move especially by the community and the clergy since 90 % of the community profess to Christianity as published by the Joshua Research Project

The Sabaot community speaks in six dialects and as much as it also draws its originality from the Kalenjin tribe which is Kenya’s third largest tribe according to the 2009 Kenya's Population Census, the low levels of education within the community has continued to hinder the spreading of the gospel even after the publication of their bible by Bible Translation Literacy (BTL).

The different dialects and spellings of the words is a challenge even to those who are considered literate to fully read and understand the Bible thus most of them prefer to read in English or Swahili. It requires more literacy empowerment for one get the pronunciation right as affirmed by Brother Simon Kapendi who is a catechist with Kaptalelio Catholic Church in Mount Elgon and is currently voicing for the Sabaot Audio Bible project.

Burdened by this challenge and with the fact that it is expensive to initiate literacy realization, the community & the clergy came together and sought for ways overcome the challenge as most of the congregations were missing out on reading The Word. After different meetings and sending out appeals and proposals to friends for support,their prayers were answered when God sent to them Davar Partners International, an organization that toils to ensure that the minority tribes receive the Word through audio.

“ I was very happy when I heard that Davar were going to support us get a Sabaot audio bible and as a pastor who had worked very hard with BTL to translate the Bible, I definitely knew what great impact this will have to the church and the community.” Says Mr Kiboki Kagai a Senior Pastor at Kapsiro Baptist Church and currently the team leader and proof reader of the Sabaot Audio Bible. 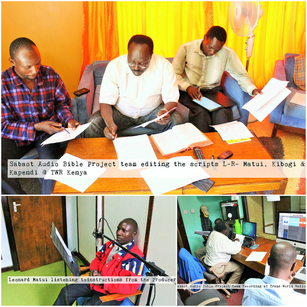 After Davar accepted to support and got consent from BTL (the text owners), the next step was recruitment of presenters who could read and voice for the project. It was also difficult to get the right personnel as many could speak but not read. Finally they were able to get on board Leonard Matui from All Saints Cheptoror Anglican Church, Phanice Matony from Seventh day Adventist Church and Femi Cheruto from Full Gospel Church Chepyuk.

According to the 2009 census the Sabaot tribe has a population of 240,000 comprising of six dialect speakers namely; in their order of hierachy Koony, Book, Bong'omek, Somek, Sabiny (Sebei) & Mosoobi. They live around Mt. Elgon in Kenya and Uganda. After a series of meetings during the writing and translation of the Sabaot Bible, the stakeholders agreed to use the Kony dialect as the language of writing since all the five originated from Kony dialect. The dialect is easily understood by the rest of the clans. By Geoffrey Otieno