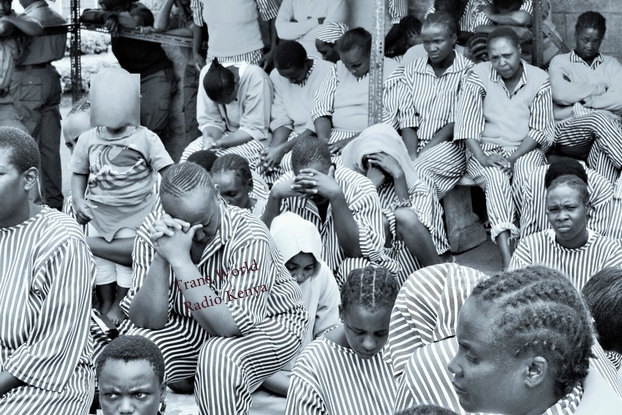 Life with very limited freedom is tough and it’s tougher if you are confined in a prison thus almost every prisoner looks forward to the day he or she will walk into freedom.

However, during a recent prison mission to Nyeri Maximum Prison (also referred to as Kingongo Prison) we discovered that one of the greatest challenge that is affecting majority of freed prisoners is rejection by the society thus making them opt to break the law so that they can be taken back to prison. To them living in prison is better than living in rejection at the slightest identification as an ex-convict. As confirmed to us by Stella Munyao Officer in Charge of the Women Section of the Prison.

Operating under the slogan “Kurekebisha na Haki” (Reforming & Justice) The Kenya Prisons Service lists its core mandate as contributing to public safety and security by ensuring there is safe custody of all persons who are lawfully committed to prison facilities, as well as facilitating the rehabilitation of custodial sentenced offenders for community reintegration. To achieve this the prisons carries out reform programs so that by the time, a prisoner is leaving prison, one is reformed and ready to fit into the community. The refusal by the society to accept them back and give them jobs is derailing the reform process.

“When these people are here we try all we can to equip them with skills and introduce them to reform programs, so we would urge the community to accept them and give them work because they have been trained and reformed. Majority of those who come back say that even after release they are still referred to as convicts.” Munyao explained during the visit.

Similar sentiments were also echoed by Peter Kambo who is the Officer in Charge of the Prison and the Assistant Commissioner of Prisons also doubling up as a Pastor in local Church. Kambo explained that one of the ways they prepare for a safe landing of the prisoners is through the Discharge Board, they invite the families to come and reconcile with them before they are released. They also engage reformist groups, churches, organizations, etc. in the process.

“ Integration starts from here so that as they leave prison their families are able to accept them they way they are.Our message has been clear that we have worked on these people in terms of their attitudes, in terms of giving them skills, in terms of accepting themselves and coming out of their guilt. Therefore I would like to tell the society outside that this are reformed people and they should give them a chance to prove that they have changed." Kambo explained .

In her remarks Trans World Radio Kenya Executive Director Bernice Gatere reminded the prisoners of Christ’s perpetual love and forgives for us all despite whatever situation we are in.

“Today we are here to show you that we also love you and care about you because even Christ demonstrated love to us and the Bible also reminds us that we need to show love to one another just as He does. We also encourage you to hold on to Christ in whatever you do.” She shared.

Among the mission team was George Odhiambo a reformed ex-convict who served for 10 years at Kodiaga Maximum Prison after a Robbery with Violence sentencing. The 10-year experience marked the turning point of his life because he had walked into the prison as a notorious criminal but walked out as a reformed man who had also found Christ. Although he still faces a lot of rejection, he does not wish prison life to anyone and thus he teamed up with other ex-convicts and they registered an reformist organization dubbed Reformist Crime Kwetu Si Poa (Reformist to us crime is not good).

Other than discouraging youths from engaging in crime, the group anchors on three programs to help in the integration of prisoners & ex-prisoners. They are Prisons Visitations, Re-entry Program that involves locating families of long-term prisoners who are about to be released and help prepare the ground for re acceptance. At the same time update them on what happened while they were away to ease the uncertainty tension. Lastly Recidivism that aims at engaging ex- prisoners in different programs so as to discourage them from wanting to go back to crime and instead use their acquired skills to make a living. To implement all these they work with any like-minded individuals or organisations. George encouraged the prisoners not to lose the hope to be free so that they can return to the prison not as a prisoner but reformed person to testify that it’s possible because prison cannot be a home.

“I also appeal to the community to give ex-convicts a chance to prove we have reformed and remove the criminal tag on us.” He added

In his sermon filled with encouragement & words of hope from the book of Acts 16 vs 16 …(Paul & Silas imprisoned). Pastor Nick Juma from CITAM-Embakasi (Christ Is The Answer Ministries) shared how God used prisoners to save the lost.

“Your victory and salvation starts within your heart. For you to be set free physically, it must start by being set free spiritually so you need to prepare your heart and be ready to forgive.” He shared.

Random photos of the Prison Mission.

During the visit, all the prisoners who got a chance to speak pleaded for acceptance by society after release. Other needs that emerged were, need for more spiritual books and bibles so that those who received Christ while in prison can leave with the bibles they were using, need for support in getting basic necessities ie soaps, tissue rolls, baby clothes & diapers since the Prisons Department only provides 2-3 napkins to prison moms and it’s difficult to re-use them especially during cold seasons.

Early last year in a separate interview with a local daily, Mary Khaemba The National Director Offender, Correction and Rehabilitation in Kenya Prison & ** The Kenya Prisons Commissioner General Isaiah Osugo** acknowledged that the fact most prisoners return to crime because of the isolation and rejection they feel when they are released. “Some commit crime to return to prison where they are accepted and treated like a part of a community.Averagely we release 5,000 prisoners to go to the free world, but they worry if they will be accepted. The paper quoted Osugo.

In most cases the first thing that comes into mind when prison is mentioned is it’s a place for criminals. We need to fight off this mentality because anyone can land in jail. It’s the right way of starting the reconciliation process. God forgives us for our sins without using them against us so we need also reconcile and not judge others by their sins.

2 Corinthians 5:18-20 All this is from God, who reconciled us to himself through Christ and gave us the ministry of reconciliation: that God was reconciling the world to himself in Christ, not counting people’s sins against them. And he has committed to us the message of reconciliation. We are therefore Christ’s ambassadors, as though God were making his appeal through us. We implore you on Christ’s behalf: Be reconciled to God.

On behalf of Trans World Radio Kenya's Church Relations Department, we would like to thank all those who supported us to make the 2018 prison mission a success. Special thanks to all officers and prisoners at Kingongo Prison, **Lukenya Getaway, ** CITAM Embakasi, Africa Gospel Church Rongai, Crime Kwetu Si Poa, & Gospel Revival Center Ruaka. Thanks to you were able to deliver bar soaps, toilet rolls, cooking oil, shoes, clothes, tooth pastes, wheat and baby flours, sanitary towels, & an assortments of spiritual enriching books & bibles (courtesy of friends of TWR Kenya) to the 1,100 male inmates & 67 female inmates with 10 children at the time of visit.