"I have listened to the entire series of Neno Litaendelea ( Thru The Bible Swahili) & today I return these audio CDs that I got here at Trans World Radio Kenya so that they can also be of blessing to someone else because I still have the same recordings on tapes."

It was one of those Tuesday afternoons, as I went on with the routine office work at Audience Relations Office, suddenly my colleague Hellen ushered in a visitor carrying a white plastic bag into the office and she immediately introduced him as Mr David Kibe, a great long time listener of TWR’s Devotional program Neno Litaendelea (TTB Swahili).

After the introductions she said that Kibe had something that he would like give to us and that is when He explained the purpose of his visit. He had carried 258 Audio CDs that he had picked from Trans World Radio Kenya since the year 2000 and they all belonged to Through the Bible Swahili program that used to air on partnering station Kenya Broadcasting Corporation (KBC) at that time. 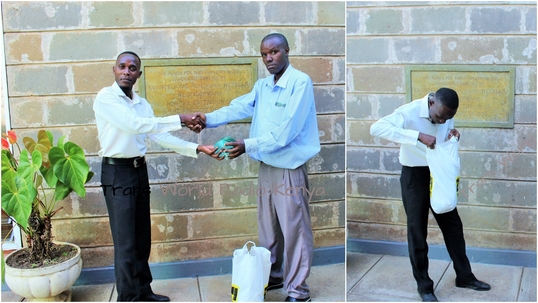 He went on further to testify how the program has been of great blessing to his life and when asked why he was returning them this is what he had to say, "I have listened to the entire series of Neno Litaendelea & today I return these Audio CDs that I got here at Trans World Radio Kenya so that they can also be of blessing to someone else. I still have the same recordings on tapes."

When he removed some of the cd’s from the bag, I was surprised that they were still looked new despite them not having casings and they were arranged with the data area facing each other (his storage technique). He later on went to explain that he has a special place in the house where keeps them before listening and after listening.

“I operate a taxi business and sometimes my work would inconvenience me from listening to the teaching so when I came here in early 2000 and requested if I could be getting copies of the already aired programs my request was accepted and before I could get the CDS I was given the programs in tapes since CD’s were not very common and most cars had cassette players at that time. That’s how ended up having both tapes and CD’s. He explained

*"I just thought why should have both copies of the programs yet someone somewhere needs to get The Word and that is why I decided to bring them here today. Someone else needs to get the blessing. God needs us to spread the gospel.”*He added

It was indeed a red letter day here at Trans Radio Kenya even as we parted with Mr Kibe, I was left convinced that indeed if you spend listening or reading to the Word requires passion and commitment and that why our friend could has been able to listen to over 1400 episodes of Neno each running for averagely 25 minutes approximately over 35000 minutes or 583 hours. 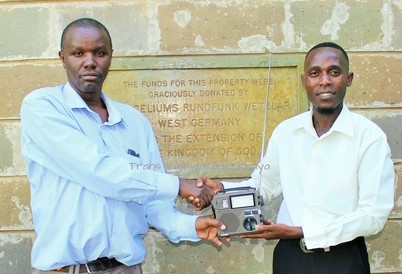 You can still listen to Neno Litaendela or TTB Swahili through our partnering stations Like SIFA FM Voi, Lamu, Marsabit, Maata Radio Lodwar, Radio Imani, Sayare FM or through TWR Africa Shortwave on band 9475/31- 100kW at 20:45 local time or online via this link http://ttb.twr.org/swahili

1 Chronicles 16:11 Seek the Lord and His strength; Seek His face continually.