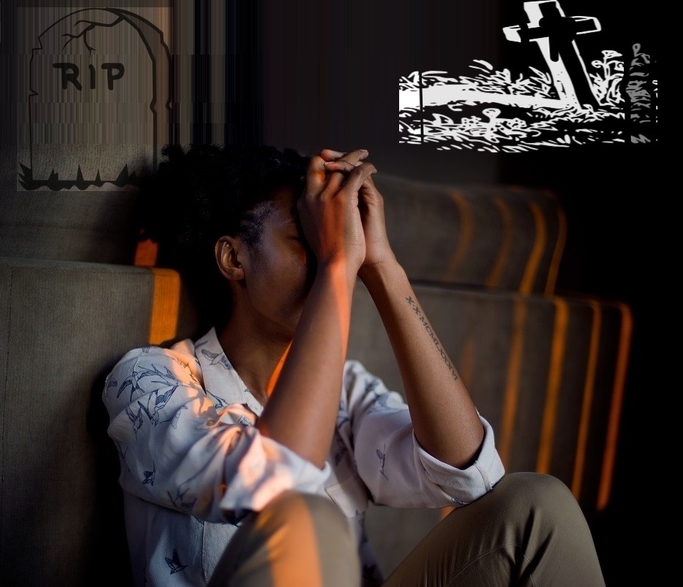 Edited stock image of a lady in deep thoughts

Program: Ngima EN Mwandu - In 2008 Evelyne Achieng saw her world crumbling down right before her. They had just moved into their new own homestead and had just welcomed a bouncing baby boy into the family. Then all of a sudden, death came knocking taking away her husband mysteriously. Leaving her with the responsibility of taking care of their week old baby and his two siblings.

The death of the family bread winner instantly opened the can of problems, the good life they had both foreshadowed in a new homestead took a different turn, and life was now filled with a lot of darkness ahead. Evelyne’s husband was also the one providing for the mother now making things even harder for her on where she could seek help. The first challenge she received was rejection from her husband’s kin. No one wanted to associate with her or even help her in anyway. All these was because of the retrogressive Luo culture on widows. Yes according to Luo culture (her ethnic community) she was supposed to be inherited by her husband’s cousin since the husband only had one sister with no blood brother. She was not ready for it at the same time no one could dare do that because the husband died before they could perform all the traditions required to be undertaken before and after entry into a new home.

Fast forward and life continued amidst the struggles and when the last-born son started walking, she left him and his two sibling under the care of their paternal grandmother in Sigomre in Siaya County and took a bus to Naivasha to join her sister in law. She had no option as those who used to hire out farms for them to dig stopped because they feared now she could not afford to pay them. In Naivasha she got a casual job for a few months before it ended and the struggle for survival continued and one day, she heard that her children were suffering at home at the same time she was getting some domestic problems where she stayed. She decided to leave Naivasha for Nairobi.

In Nairobi she moved in with her brother in a Dandora and started doing odd jobs like doing laundry to different households for pay, being house help among others. Later on a friend invited her to stay with her at Mukuru kwa Ruben slums. While at kwa Ruben she was introduced to Wangu Kanja Foundation a foundation that supports survivors of sexual violence. Yes, before she got married Evelyne had undergone a rape ordeal that even interfered with her education and depiteyears passing, she still needed professional help to help her heal from that ordeal. At Wangu Kanja she met the founder Wangu Kanja (rape survivor) and other survivors of sexual and gender based violence. At the foundation, she was enrolled to a women’s empowerment program where she was taught on how to make peanut butter and later on they were supported by an organization to get a peanut butter making machine.

With her determination to make it, the foundadtion changed her life as she now is in peanut butter business and through it she has been able to provide for her family. Her firstborn is now in Form 4 & the second in Form 2. Another organization also taught her to do beadworks and she makes beaded ornaments for sale and doing finishing on bags and garments etc. She is also hopeful that she one day get her own Peanut Butter making machine.

When Evelyn shared her life story through Ngima En Mwandu (Health is Wealth), a developmental Radio health program produced in Dhloluo language from Trans World Radio Kenya. Many listeners were moved and encouraged by her story and here was her parting shot-

“I would like to encourage everyone especially women to find something productive to do. If you are married don’t depend on your husband to provide for everything because the world is changing and even husbands want hardworking women and if God forbid something bad happens that he can no longer provide or he is not there you will always have somewhere to pick up from. I also appeal to my community to abandon the un biblical retrogressive cultures associated with widows they have made it tough for women to move on as compared to men when death occurs. Lastly am grateful that the church has come to the rescue of widows against these practices. If it gets tough for you as widow join a Church you will be saved”

Beatrice from Uyoma : I am in the fish business and am also a farmer. I would also like to encourage my fellow women whether widowed or still married that they should engage in farming if land is available.

Am Reverend Dan Owuor from Bondo ACK Cathedral: Am very happy with what you have shared today, have learnt a lot and am inspired and encouraged that we should all not idle around but be productive in our family. Both the husband & wife have a duty to play in providing.

Salim from Osiri: I am greatly inspired. I have been motivated to start saving if I want to do something and I should seek advice from friends who love development.

Teresa from Kokiri: Am very grateful for the program and may the Lord bless Evelyne. Indeed God has been on her side and she should not forget from where God has taken her. For me I am taking care of orphans through my second hand clothes business. Am encouraged.

Mama Daddy from Oriang: My husband died in 2018, am greatly encouraged because currently am a tailor and through the business am able to provide for my children

Rose from Seme Kombewa : I am encouraged and challenged that as a woman I should not just idle around and ask for money. I should also look for it

Clarice from Oyugis: I have received the encouragement that widows should not give up and idle around because they have no means. Learn to do any job you get because it is through your hard world that you will make it

Do you understand Dholuo? we invite you to listen to Geoffrey Otieno, Joseph Olouch & Phostine Maningi as they team up to promote healthy living through Ngima En Mwandu Radio program by touching on issues that affect your life both physically & spiritually. Listen through the following frequencies in the image below