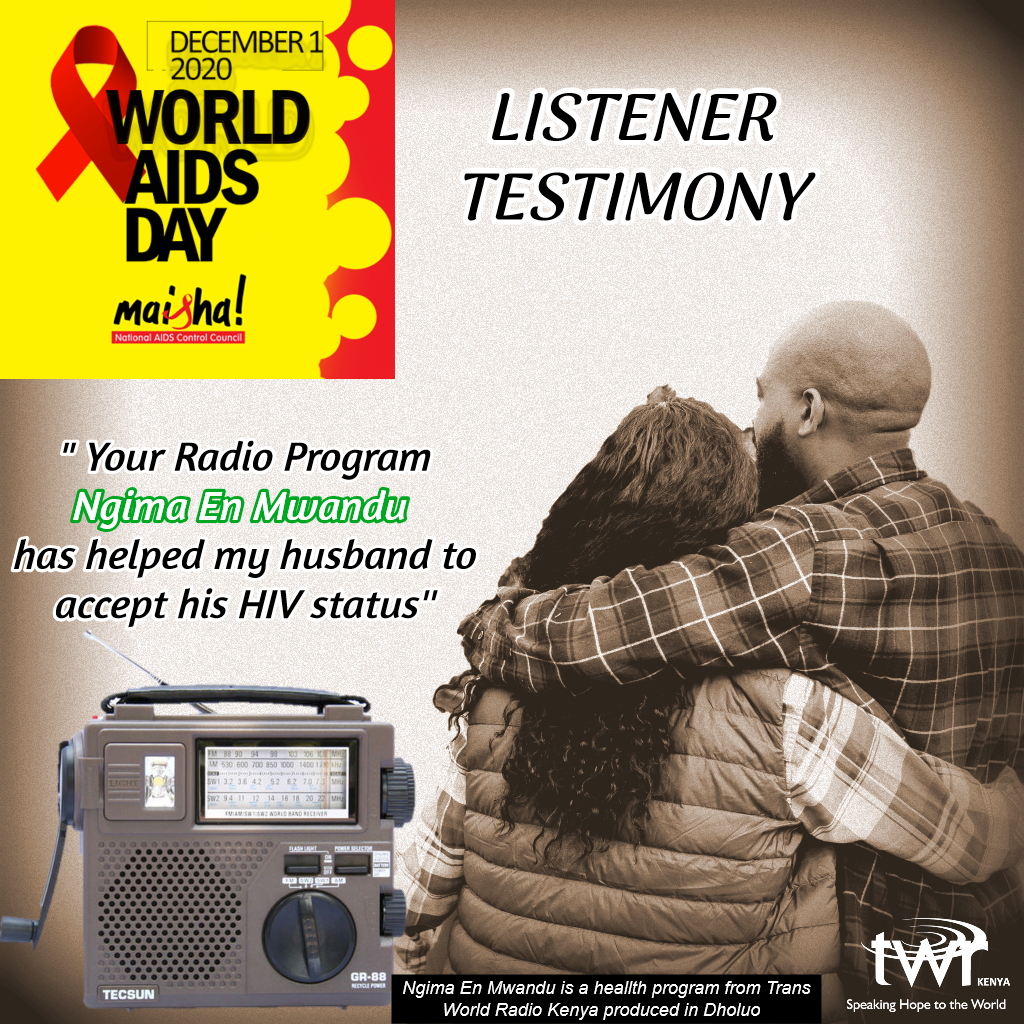 It was during my second pregnancy that I detected that I was HIV positive during one of the clinic visit. The doctors and the nurses broke the news to me in a very professional manner and although I was confused and worried of my future and that of the baby, I still had some assurance inside me that all will be well. I think this is because I had heard many teachings about HIV and pregnancy through your Radio Program Ngima En Mwandu that airs every Wednesday on Radio Nam Lolwe.

When I went home and broke the news to my husband, he was shocked and asked if we Have HIV why are we not falling sick all the time. I tried to explain to him from the little knowledge I had received but still it was difficult for him to understand and accept to go for a test as I was told to encourage him to accompany me to the hospital or voluntarily go for testing elsewhere. The fact that he works in Kisumu City while I stay in the village made it difficult for me to convince him further because he would only come to the village during his off days.

Months later, I was able to deliver and the baby came out negative even after subsequent tests. This was great news because I understood why it happened but on the other hand my husband became more confused because he has never fallen ill and the baby is also ok so he totally refused to accept to go for testing and would not want to hear me talking about HIV in the house.

I would say my the breakthrough came when one day, it was on a Wednesday and he was at home and I opened the Radio to listen to Ngima En Mwandu from Trans World Radio Kenya and I remember after the program he said that it was the most informative program he has ever listened to produced in Dholuo language. He asked for more details and I told him he could always listen every Wednesday at 8:45 PM on Radio Namlolwe. Right there and then he became a loyal listener and I very much grateful to the Ngima team because after that I requested that you need to talk more on HIV because many people do not understand it. There are still myths and stigma associated with it so this makes it difficult for many to come out in the open or ask questions. Thank you for agreeing to my request and you have brought in more experts and HIV positive guests in the show and in that process my husband was able to understand more about HIV. Although he still lacked the courage to go for testing, his line of arguments had changed as he was more informed. Then one day I requested that you call and talk to him because I had found a doctor who was willing to help him in testing counselling and was happy that after the program producer called him he agreed to finally go for testing and my marriage is now more peaceful without any disagreements on intimacy.*

Thank you Ngima en Mwandu team for giving us a platform to talk & learn on this matter that many are afraid to talk about or even seek medical help. Through the hospital I was put in a support group of those living with HIV and I was surprised to learn that many members in the group listen to the program and also appreciate the fact that you not only focus on HIV but aim at promoting general healthy living by focusing on different topics. The program also gives us alot of hope through the short devotional messages and I just wish that it can be added more time

Even as the world commemorates World AIDS Day today, we celebrate all our listeners and program guests who have helped us in raising awareness of the HIV pandemic also giving hope to many that getting HIV is not a death sentence.

As published in The Standard Newspaper online publication, "Children of school-going age form the biggest bulk of new HIV infection., according to government data to be released on 2020 World AIDS Day commemoration. Young girls are the most affected. The National Aids Control Council (NACC) data shows that this year alone 21,404 new infections were recorded within the age bracket of schoolchildren. This is more than half the total number of new infections recorded in the whole country over the last year. Cumulatively, NACC data shows that a total 41,728 new HIV cases were recorded this year, 25,062 of them being female and 16,666 male. Those aged 15 years and above recorded 34,610 new infections, with 6,806 cases documented among children aged 14 years or below.

Kisumu, Nairobi, Siaya, Homa Bay, Migori, Nakuru, Mombasa, Kisii, Kakamega and Kiambu are the top 10 counties with the highest numbers of new infections this year. Overall, there are 1.5 million HIV infections this year, with 20,997 deaths. Nearly 500,000 of the infected adults are not on antiretroviral therapy (ART), accounting for about 20 per cent. Some 72,968 infected children, accounting for 30 per cent of HIV positive children, are yet to be put on ART."

If these statistics on HIV prevalence in the country especially among the Youths and in the Nyanza region are anything to go by, then we still need to unite and reaffirm our commitment to stop new infections. United we stand

As we commemorate this day, we also thank our partners who support our Developmental Radio programs like Ngima En Mwandu, Afya Yako, & Mazingira Yetu that run on our SIFA FM Stations & on partnering Stations.