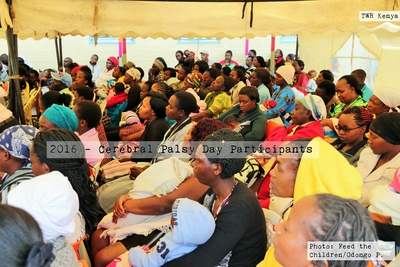 Every 5th of October is an international Public Awareness day for Cerebral Palsy condition.

Cerebral Palsy ( CP) is a condition that affects the motor part of the brain hence making movement and posture tough or not attainable at all. It is however very important to note that cerebral palsy is an umbrella term that encompasses a wide variety of disorders that affect a person's ability to move. Cerebral Palsy is also a lifelong condition that if generally managed may not deteriorate according the Cerebral Palsy Society of Kenya

This yearTrans World Radio Kenya joined hands with Feed The Children Kenya, Cerebral Palsy Society of Kenya & other stake holders to mark this day at Feed the Children Rehabilitation centre in Nairobi. Among those present at the event was Monica Wamboi Kariuki, a mother of 11 years old girl who is suffering from Cerebral Palsy.

In May 2005 was a month of joyous blessing to the family of Monica as they welcomed baby Purity Waceke to the world after 9 months of normal pregnancy. Baby Purity was born without any visible complications and the first 7 months everything was normal with usual sleepless nights.

In December when Purity was barely 8 months, she started feeling unwell and she was taken to hospital but the doctors could not promptly diagnose what ailing her and that was the beginning of the numerous trips and admissions to a private hospital. She was diagnosed with Meningitis but even the medications could not stop her cries and pains.

In June 2006, the treatments had exhausted their resources and she informed the hospital that they could no longer afford treatment. She was referred to Infectious Diseases Hospital (IDH) Mbagathi, (public hospital) and its where the doctors informed her that Purity has Cerebral Palsy. She was shocked and surprised as the doctor and nurses tried to explain to her about the condition. It was confusing how could she understand this yet her other two children had a normal growth life. When Monica went home, she gathered the little courage that she had left and broke the news to her husband as she was advised that their daughter would need special love and care. She had never anticipated that the high stigma associated with Purity’s condition could end their marriage because months after she informed the husband, he abandoned them and moved to court to get custody of the other two children but the court ruled in her favor.

Having been left alone to fight the high stigma Monica had no option but try her level best to get all the information she could about Cerebral Palsy and how she could help her daughter. With little public knowledge on CP, Monica had an herculean task of explaining to her friends and relatives why her daughter was confined to a wheelchair and she is not bewitched. Even now some understand as others have refused to stop associating CP with myths and beliefs. For example Purity’s grandfather believes that there is a concoction of herbs that can cure her granddaughter to make her to stand and walk. ‘’Ndama yake alishindwa kusimama na akampatia dawa ya kienyeji na ika tembea.’’ His calf could not stand walk and he gave it traditional herbs and it walked adds Monica. The grandfather still believes that Monica is the one stopping Purity’s healing as she has refused seek traditional medicines. 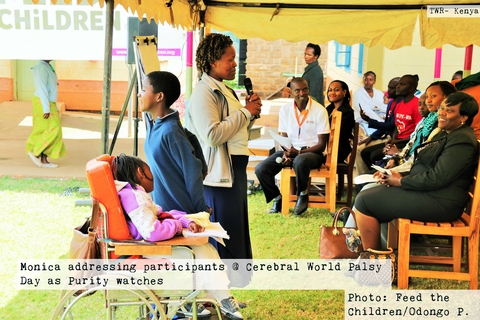 In her quest to find care and information on CP Monica landed at Abandoned Baby and Children Center, a rehabilitation centre under Feed The Children organisation that takes care of over 40 children with disability. Some of this Children we found abandoned Currently 23 of them have Cerebral Palsy.They also have outreaches every Monday and Thursday in Dandora & Kajiado as explained by Stephen Muga, 2016 CP event organiser and a lead Rehabilitation Coordinator & Occupational Therapist with Feed the Children Kenya.

Other than providing care Feed The Children also as also intitiated an economical empowerment Program called Dagoretti Special Mothers and through it Monica has been able to set up a business to enable her provide for her family. Purity is also the school under special care. Through the various seminars Monica has been empowered making her become the source of strength and information to many mothers with children with disability and has helped them learn to accept the condition of their children. To them she is the de factor ambassador mom.

Although its unclear on exactly what causes Cerebral Palsy reseach as identified other causes like Premature birth, Low birth weight,blood clotting problems, the placenta being unable to provide the foetus with the necessary vitamins and nutrients, Infection of the mother with German measles or other viral diseases in early pregnancy, Bacterial infection of the mother, foetus or baby that directly or indirectly attacks the infant's central nervous system, prolonged loss of oxygen during the pregnancy or birthing process, or severe jaundice shortly after birth among many others as pulisehd by the Celebral Pasly Society of Kenya.

Monica is urging all parents with children with Cerebral Palsy and other disabilities not to look at the children as a burden but as a special child who needs a special love and care to help the manage living with the permanent condition. She owes all her gratitude to Feed the Children for the support and love they have shown towards her family and others.

With the need for more awareness campaigns & statistics, Trans World Radio Kenya has built a working relationship with Feed The Children Kenya for this course. This year's the event was also marked with a walk at Dr. Ribeiro Parklands Primary where a campaign for the developing policies and curriculum for children affected by CP was launched. Dr. Ribeiro is the only public school with a fully-fledged Cerebral Palsy Unit.

Feed the Children Kenya accepts volunteers to play with the children and qualified care givers who are willing to join them in the outreach programs, You can also support them financially or donate toys, un cooked food etc to help support the rehabilitation program. 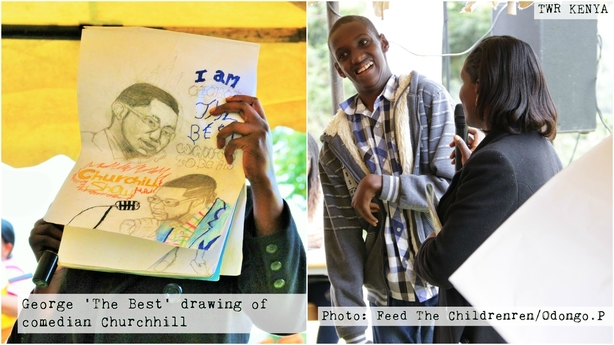